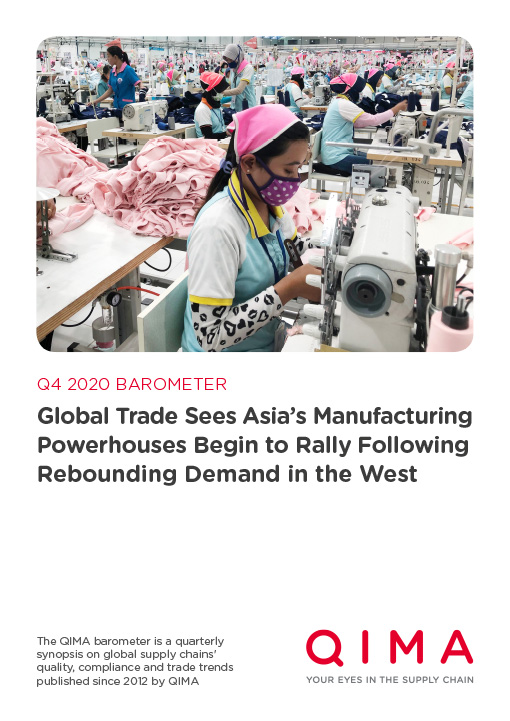 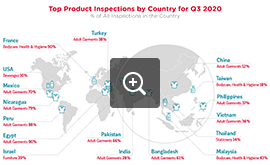 Despite the fairly apocalyptic outlook that prevailed earlier in the year, sourcing insights for Q3 suggest that the crash of global trade in 2020 may ultimately be less dramatic than predicted. QIMA field data shows that sourcing demand is picking up pace in manufacturing powerhouses throughout Asia, including China, Vietnam and Bangladesh, all of which are poised to wrap up the third quarter with positive year-on-year growth figures – a first for 2020. However, this turnaround is not without a cost: ethical audit data collected in reopened factories suggests that the pandemic may have reversed a number of the sustainability and social compliance gains made over the past few years.

China Exports Make a Strong Recovery Buoyed by Rebounding Demand in the West, with Contrasted Results by Industry

After following a pattern of W-shaped decline and recovery throughout the first half of 2020, China sourcing has continued on an upward swing in Q3. QIMA data shows a notable swell in inspection and audit demand in July and August (+8% YoY and +17% YoY, respectively), with China volumes poised to finish Q3 2020 at +11% YoY, a figure more reminiscent of its pre-pandemic performance.

Western businesses were quick to flock back to China in Q3, with demand for inspections and audits from US and EU buyers spiking +15% YoY for both in Q3, and the fastest pace of expansion observed in sectors such as Electrical and Electronics (+43% Q3 YoY from US and EU combined), Toys (+21%), and Homeware (+56% from US buyers). Meanwhile Chinese Textile and Apparel volumes continue to struggle, recording -15% decline in Q3 YoY and -27% Year-to-Date, suffering from an ever-growing competition from its Asian neighbors.

Manufacturing Throughout Asia Picks Up Pace, with Vietnam, Bangladesh Ahead of the Pack

Indeed, the rebound of sourcing has not been limited to China, with inspection and audit demand picking up again even more strongly in manufacturing hubs throughout Asia, showing further evidence of global supply chains' disentangling from China.

Following a collapse in sourcing volumes during April-May 2020, suppliers in Southeast Asia saw a turnaround in Q3: demand for inspections and audits showed a +10% YoY uptick in July, followed by an even faster growth pace in August (+23%) and September (+41%). While business volumes climbed steadily in Myanmar, Indonesia and the Philippines, Vietnam once again emerged as a clear winner in the region, with three months of sustained expansion resulting in +82% YoY growth in demand for inspections and audits in Q3 2020, suggesting that local manufacturers were successful in catching up on export orders backlog after the initial influx of Western brands earlier in the year.

Meanwhile, demand for inspections and audits in South Asia rose across the board in Q3, as the tentative recovery that had begun in June continued and progressively accelerated for three consecutive months (inspection demand volumes climbed +7% YoY in July, +10% in August and +28% in September). This recovery is being led by South Asia's textile powerhouses such as Bangladesh, where demand for Textile and Apparel inspections surged +86% YoY in September, propelled, among other factors, by the continuing influx of US buyers as they continue diversifying their apparel supply chains away from China.

As Supply Chain Diversification Continues, US Buyers Flock Back to Reopened Capacities Throughout Asia, while EU Brands Step Up Near-Shoring

It is worth noting that buyers from both sides of the Atlantic played an equally important role in this rebound of manufacturing, not just in China, but throughout Asia. Vietnam received similarly evenhanded attention (inspection demand from American and European buyers +91% YoY and +96% YoY in Q3 2020, respectively), with Textile and Homeware among the most popular product categories.

By contrast, the trend towards increased near-shoring observed earlier in 2020 was less prominent in Q3. For instance, US brands, especially in the Textile and Apparel sector, were more likely to take advantage of the reopening capacities in South Asia (Textiles inspection demand +38% YoY in Q3) than divert more of their sourcing to Latin and South America where the Covid-19 impact was still in full force in Q3. EU buyers, however, continued expanding their near-shoring sourcing footprint in the Mediterranean and the Middle East, with Morocco, Egypt and Tunisia all recording double-digit year-on-year growth in inspection and audit demand during the third quarter.

QIMA audit data indicates that businesses continuing to operate in "survival mode" is putting further strain on ethical compliance in global supply chains, with businesses more likely to prioritize cost saving over sustainable sourcing, as well as push their suppliers to meet deadlines for high-demand products (such as PPE). Such practices can lead to insufficient scrutiny of working conditions and labor policies, resulting in increased risks to worker safety, forced overtime and other ethical violations.

In Q3 2020, the factory scores recorded by QIMA ethical auditors were -4.5% lower compared to 2019 averages, with approximately 62% of factories needing remediation in the medium and long term on a variety of issues, including Health and Safety, working hours and wages, waste management and more. Previous QIMA research found that social and sustainability concerns tend to drop lower on a business's agenda during times of disruption and transition. Given the scale of the ongoing disruption triggered by the pandemic, it is reasonable to expect that social and sustainability improvements will continue to take a back seat to economic considerations in the medium term. 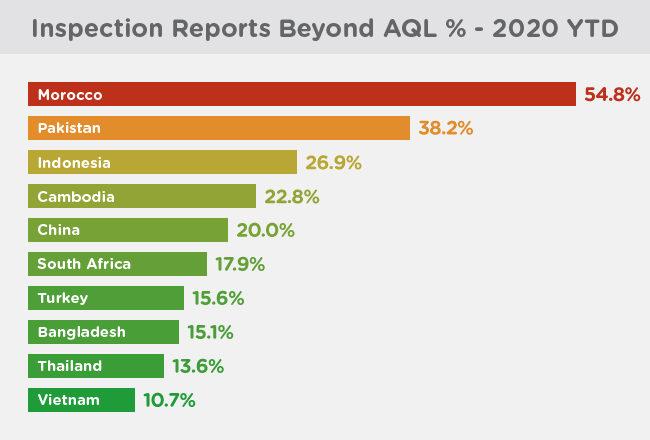 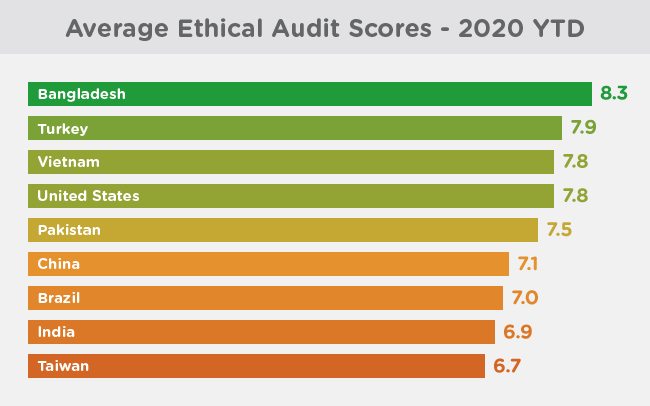