ASTM International published ASTM F3502-21 in February 2021 which provides specifications for both single and reusable non-medical barrier face coverings; the standard was developed by subcommittee F23.65 for respiratory protection.

The standard was primarily established in response to the global COVID-19 pandemic beginning in 2019 to address a product that is neither a medical face mask per ASTM Specification F2100 for providing source control, nor a respirator for providing inhalation protection as defined by regulatory requirements specified in the United States under 42 CFR Part 84.

Following are the key requirements established by the standard:

On February 16, 2021, TPCH announced the organization’s update to its ‘Model Legislation’. In addition to maintaining the regulated four heavy metals, the legislation has been expanded to restrict the class of perfluoroalkyl and polyfluoroalkyl substances (PFAS) and ortho-phthalates in packaging and packaging materials.

The Source Reduction Council of the Coalition of Northeast Governors (CONEG) developed the Model Toxics in Packaging Legislation in 1989 to reduce the amount of heavy metals in packaging and packaging components that are sold or distributed throughout the United States. The intent was to curb the amount of heavy metals – specifically, lead, mercury, cadmium, and hexavalent chromium ─ entering the municipal solid waste stream and, ultimately, landfills, incinerators, and recycling streams from packaging, since packaging comprises approximately one-third of the waste stream. TPCH was formed in 1992 to promote the Model Legislation and consistency in its implementation across states that adopted the Model Legislation. To date, the Model has been adopted by nineteen U.S. states, including: California, Connecticut, Florida, Georgia, Illinois, Iowa, Maryland, Maine, Minnesota, Missouri, New Hampshire, New Jersey, New York, Pennsylvania, Rhode Island, Vermont, Virginia, Washington and Wisconsin.

The updated Model Legislation became effective on February 16, 2021 and it will be up to each state to adopt changes to their existing laws or adopt a new law to address toxics in packaging.

In February 2021, Washington State has announced that PFAS in four types of food packaging will be banned as of February 2023.

In 2018, the Washington State Legislature passed legislation banning the use of per- and polyfluoroalkyl substances (PFAS) in “specific food packaging applications” if safer alternatives are available (recodified as RCW 70A.222.070). This law requires the Washington State Department of Ecology (DoE) to conduct an alternatives assessment to evaluate “less toxic chemicals and nonchemical alternatives” and determine whether safer alternatives are available. This law defines “food packaging” as “a package or packaging component that is intended for direct food contact and is comprised, in substantial part, of paper, paperboard, or other materials originally derived from plant fibres.”

According to the law, the prohibition on the use of PFAS chemicals in food packaging:

Based on the availability of safer alternatives, per- and polyfluoroalkyl substances (PFAS) in the above four types of food packaging will be banned as of February 2023.

However, in the following food packaging applications, DoE did not identify any alternatives that met the criteria for safer without restrictions at this time:

DoE will continue with the alternatives assessment process for these six products, as well as other potential products.

ASTM F3492-21 covers safety requirements, chemical requirements, performance requirements, and warnings for child safety locks and latches intended to be installed by consumers to the interior of residential cabinet doors and drawers to restrict access to household cabinets by children under the age of 48 months.

The key requirements include:

The child safety locks and latches that are not covered by this standard include those:

On March 8, 2021, the U.S. EPA asked for additional public input to re-examine on five final rules for persistent, bioaccumulative and toxic (PBT) chemicals issued on January 6, 2021 under the TSCA. This included an additional 60-day comment period for the five PBT chemicals and a temporary 180-day “No Action Assurance” indicating that the agency will exercise its enforcement discretion regarding the rule for Phenol, isopropylated phosphate (3:1) [PIP (3:1)].

However, on the same day of the effective date for starting the restrictions, the EPA is asking for additional public input, including an additional 60-day comment period for the five PBT chemicals and a temporary 180-day “No Action Assurance” for PIP (3:1), in accordance with Biden-Harris Administration executive orders and directives since these rules are intended to provide critical health protections for Americans, including children, workers, other potentially at-risk groups, and the environment. Re-examining these rules will ensure the promise from the U.S .government to protect human health and the environment by reducing exposure to toxic chemicals can be delivered.

These five PBT chemicals are:

The toy safety standard originated in Australia as part of AS 1647-1974 and later has been jointly revised and redesignated as AS/NZS ISO 8124.3. The new version AS/NZS ISO 8124.3:2021 identically adopts ISO 8124-3:2020, which was published in March 2020 and specifies maximum acceptable levels and methods of sampling, extraction and determination for the migration of certain elements including antimony, arsenic, barium, cadmium, chromium, lead, mercury and selenium from toy materials and from parts of toys. The standard does not apply to packaging materials unless they are intended to be kept, for example boxes and containers, or unless they form part of the toy or have intended play value.

The newly published standard contains several major changes when compared to the previous version. The key changes include:

The migration value requirements are provided in Table 1.

On March 9, 2021, the European Chemicals Agency (ECHA) published proposals to identify eight chemicals as Substances of Very High Concern (SVHC) and possible candidates for authorization. Interested parties are invited to comment on the eight proposals by April 23, 2021. If the eight proposals are accepted, the Candidate List of SVHC will expand to 219.

All eight substances are proposed because of their potentially serious and often irreversible effects on human health and the environment. The names of the substances, the reasons for their proposal as SVHC and their potential uses are provided in the below table:

The European Commission has approved Commission Delegated Regulation (EU) 2021/277 to amend Annex I to POP Regulation (EU) 2019/1021 regarding the entry of Pentachlorophenol (PCP) and its salts and esters with setting its Unintentional Trace Contaminant (UTC) limit at 5 ppm by weight. The update shall enter into force on March 15, 2021.

POPs Recast Regulation (consolidated version to September 2020) is an EU restriction on persistent organic pollutants in products, in which Annex I contains a list of substances that are prohibited in manufacturing, placing on the market and use, whether on their own, in mixtures or in articles.

PCP and its salts and esters were listed in Annex I without an Unintentional Trace Contaminant (UTC) limit when the POP Recast Regulation was published in 2019. The European Commission, however, has determined the presence of PCP and its salt and esters as impurities in some articles such as imported textiles and recovered wood chips to produce wood panels since the publication. The new limit is therefore set to allow the continuation of recycling of wood chips and to facilitate enforcement for PCP and its salts and esters. The updated requirement is summarized in Table 1.

Above requirements must be checked by an approved 3rd party lab and according to conditions mentioned in government decision. It is important to note that reusable textile masks can still be used if they comply with this updated requirement.

On February 15, 2021, Benelux countries published a joint letter to prohibit the use of bamboo or other unauthorized additives in plastic food contact materials placed in the EU market.
The Benelux authorities will begin reinforced market controls starting the second quarter of 2021. In case of non-compliance, the Benelux authorities will pursue infringement actions.

As confirmed in a note by the European Commission and Member States on June 23, 2020, the use of bamboo in combination with polymers, such as melamine (so called ”bamboo-melamine”) for the manufacture of plastic food contact materials is not authorized under article 5 of Regulation (EU) No 10/2011.

Controls done by EU Member States have shown that a wide range of non-compliant “bamboo-melamine” composite food contact materials are currently on the EU market. In addition, migration of melamine and formaldehyde have been found on many occasions to be considerably above the limit laid down in Regulation (EU) No 10/2011 leading to the recall of these products from the market.

On February 15, 2021, Belgium, the Netherlands and Luxembourg (Benelux countries) published a joint letter on the use of bamboo or other unauthorized additives in plastic food contact materials placed in the EU market. According to the joint letter, business operators will have to withdraw “bamboo-melamine” materials and articles from the EU market immediately. Importers wishing to bring “bamboo-melamine” products to the EU market will have to submit an authorization dossier according to Regulation (EC) No 1935/2004.

In addition to the joint letter, there were several notifications in the Rapid Alert System for Food and Feed portal (RASFF) on border rejections from Spain and Austria as the notified products are “bamboo-melamine” products.

On November 19, 2020, the Standardization Administration of China published a voluntary standard GB/T 39498-2020 "Guidelines for the Control of the Use of Key Chemical Substances in Consumer Products" on restriction of hazardous substances in consumer products, which will come into effect on June 1, 2021.

The scope of application of this standard is consumer products, including product components, parts, accessories, packaging, and instructions for use. It is not applicable to products under special government supervision such as food, medicine, cosmetics, tobacco, special equipment, airplanes, ships, and military products.

The creation of this standard allows for quality and safety supervision of consumer products, provides consistent safety technical requirements for the design and manufacture of products, and provides a technical frame of reference for various institutions.

The Standardization Administration of the People’s Republic of China recently released announcement No.22 of 2020, which included the update that GB/T 4146-2020 “Textiles—Man-made fibers—Part 1: Generic names” has replaced the 2009 version. It will be effective on May 1, 2021.

GB/T 4146.1 lists out names of the various chemical fibers based on the main polymers for industrial production, textile and other uses, and gives their main characteristics.
The new version includes many updates to the old version, with the key technical differences as follows:

The Toys and Children’s Products Safety Ordinance stipulates that a person must not manufacture, import, or supply a toy or a Schedule 2 product unless it complies with all the applicable requirements contained in any one of the safety standards respectively specified in Schedules 1 and 2 to the Ordinance. The standards specified are international standards or standards adopted by major economies.

Proposed updates to Standards Specified for Toys and Schedule 2 Products:

In China, when hazards are identified in consumer products, they will be recalled and published and this information is updated daily. The China recalls from October 1, 2020 to March 15, 2021 are summarized below: 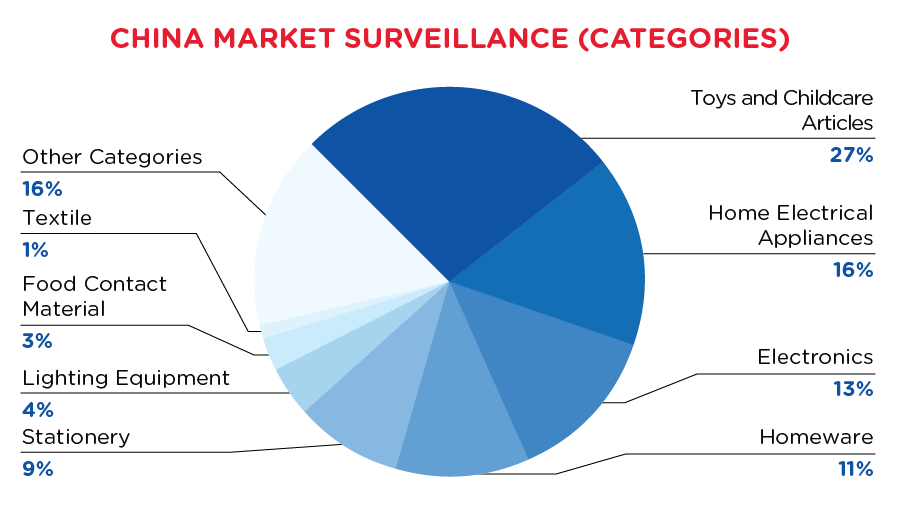 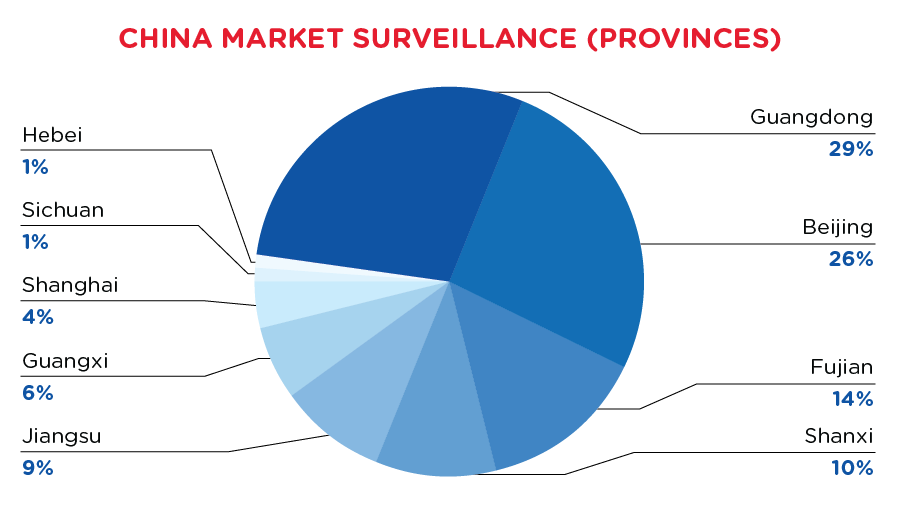 Thank you for subscribing.

For any questions you may have: