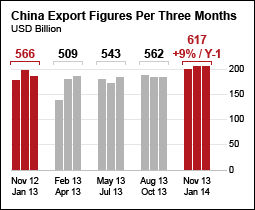 Due to Chinese New Year seasonality, February export figures plummeted 18% compared with 2013. The media has been reporting that the Chinese economy is on the brink of slowdown.

What isn't mentioned is that China continues to be the dominant sourcing region by sheer volume. December and January set new records for total exports, surpassing $207 billion USD in both months.1 Adjusting for the Chinese New Year holiday by comparing November through January 2013/2014, total Chinese exports increased +9% compared with the same period in 2012/2013.

QIMA figures surpassed this with year over year growth of +12% for ordered inspections within China. More telling and perhaps a leading indicator of the export figures to come, March was up +26.2% compared with the year before.

Why the increase? In Q1 the Chinese Yuan had the first major currency reprieve since 2005, depreciating 2.7%. For companies looking to emerging markets for manufacturing, this has been little more than a "China-Plus-One" strategy: core manufacturing has remained in China. China has continued to preserve a healthy balance of wages, a developed infrastructure and the world's largest workforce.

South & Southeast Asian countries have offered opportunities to reduce labor costs. Though their respective economies are much smaller, emerging markets were the clear winners in percentage growth. Ordered inspections in Bangladesh were up +70% year over year and Vietnam +57%. Cambodia increased +32% despite unrest in the apparel industry which has resulted in protests across the country, escalating in January when police fired upon protestors, killing at least four people and wounding 38 more.2 In Indonesia, where the textile industry is set to become the country's largest export segment, inspections were up +22%.

Brands and Retailers Take Control of Their Supply Chains

QIMA's 2014 Q1 data shows a +156% year-on-year increase in Ethical and Manufacturing Audits in Asia. Rana Plaza highlighted how factories often illegally sub contract out orders after major retailers reported that their products were never authorized to be manufactured there. An increasing common practice is to interweave Ethical Audit Programs with on-site product inspections to ensure manufacturing actually occurs at an approved factory.

The American Chamber of Commerce surveyed 400 member companies sourcing from China and found that 40% have plans to spend significantly more on ethical compliance.3 EU based companies are facing stricter guidelines that require them to report on their policies regarding ethical issues, corruption and the risks they pose to human rights throughout their supply chains.4

China has not been exempt from ethical compliance issues. In Q1 16 workers were killed during a factory fire in Hangzhou5 and 11 were killed in a factory blaze outside of Shantou in the Guangdong province.6

Low cost labor intensive manufacturing is on the rise in Africa. QIMA ordered inspections were up +65% year over year. The American Apparel & Footwear Association reports that companies are choosing to invest in manufacturing for markets such as South Africa closer to the destined consumer market, rather than in Asia.7 Africa also represents the greatest population growth potential over the next 20 years, providing both labor and end customers to companies planning for the long term. Ethiopia, a leader in terms of foreign investment, is aiming for an export goal of US$1 billion in 2014 as part of the four year Growth and Transformation Plan.8