View the barometer on slideshare

Hong Kong, January 7, 2016 – QIMA, a leading global quality control and compliance service provider that partners with brands, retailers and importers around the world to secure, manage and optimize their supply chain, today announces its 2015 Q4 Barometer, a quarterly synopsis on outsourced manufacturing and the quality control services industry.

This year’s Christmas hit story, the popular “hoverboard”, turned out to be a made-in-China safety nightmare as videos went viral in December showing products bursting into flames, with users quickly escaping what could have been a not-so-nice way to celebrate the holiday season. While consumer safety agencies, such as the CPSC in the US, have launched investigations, retailers worldwide already went ahead with massive product recalls over potential fire hazard.1

This story adds to a trend that has been consistent for years with China making headlines for product safety issues. China and Hong Kong accounted for 60% of all EU consumer goods recalls in Q3 2015 while only making up 18% of all EU merchandise imports.2

QIMA data indeed shows that through all of 2015, nearly one in three product inspections performed in Chinese factories have failed for exceeding the allowed level of defects.

Meanwhile, as other Asian rising stars develop into export powerhouses in the wake of lower manufacturing costs, quality issues are on the rise. Inspection failure rates in 2015 saw a booming +13% in Pakistan, +11% in Thailand, +9% in Vietnam, and +4% in Cambodia. Even the more mature India saw a +3% increase in failure rates. 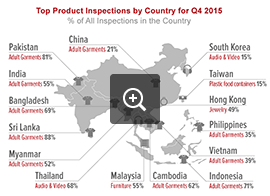 As buyers turn to new sourcing regions for cheaper alternatives to China, 2015 has brought to light how less mature export economies are often plagued with ethical supply chain issues.

Thailand remains in the spotlight under further accusations of modern slavery. A recent investigation revealed extensive use of slave labor in the peeling of shrimp. Thailand's seafood industry has a long history of grave violations, but while previous instances of slave labor were found very far down the supply chain, this latest discovery involves a higher tier of supplier – only one step removed from major Thai seafood exporters.3

In Turkey, worker health and safety remains a grave issue, as the country has been named among the worst for labor rights and worker safety by the International Trade Union Confederation and the ILO.4 Over a year after the Soma mine disaster, the worst industrial accident in Turkey's history, the mine's owner is still refusing charges brought against him. The overall safety situation in the country is not improving, and the death toll in 11 months of 2015 has already reached 1593.5

QIMA data on Factory Auditing scores (based on ethical, structural, environmental and manufacturing factory audits) indeed shows no improvement year-on-year as scores remained flat globally in 2015. Again, less mature manufacturing economies were the low performers and saw factories compliance deteriorate, with Cambodia seeing its average factory score decrease by more than 2 points (out of 10) in Q4 2015 vs. 2014, and Pakistan, Indonesia, and Vietnam also seeing compliance drop.

What to Expect in 2016 Global Sourcing?

While the COP 21 summit held in France in early December has shown significant positive signs and willingness of governments to tackle global warming and incite environmental consciousness,6 the situation remained all too different in China.

The country is experiencing unprecedented amounts of air pollution, as Beijing, covered with heavy smog, issued a "red alert" twice in the past month. Pollution in China accounts for 17% of the nation's annual death toll, killing over 1.5 million people every year.7 Combined with the heavy water pollution (60% of ground water not fit for human contact8), the current environmental situation in China remains very grave and continues deteriorating. Massive efforts to combat the problem are underway, as the government tightens environmental regulations,9 while NGOs take to publicly shaming the worst offenders.10

As QIMA has seen demand for Environmental Audit services pick up in 2015 from brands and retailers that wish to assess the impact of their supply chain, in the wake of such initiatives as Greenpeace Detox ® campaign or the Zero Discharge of Hazardous Chemicals (ZDHC) principles, one should expect to see environmental impact moving up the priority list 2016 for global sourcing executives.

As 2015 saw the slow death of the Doha round of negotiation within the World Trade Organization members, regional bloc-to-bloc agreements could help reinvigorate global trade in 2016. The Trans-Pacific Partnership (TPP) between North America and Asian countries and the Transatlantic Trade and Investment Partnership (TTIP) between the EU and the US are due for finalization and will complement global WTO agreements to come, in a move to boost bilateral and global trade.11

As experts anticipate a global trade rebound, particularly in south-to-south exchanges,12 QIMA indeed has seen growth building up in the Southern Hemisphere through 2015, as product inspections volumes increased: including by 129% in Cambodia, 119% in Thailand, 114% in Peru, and 108% in Vietnam.

Vietnam could be a 2016 winner: already among the US's top ten trading partners, it expects to see explosive growth in export (reports estimate by +50%) when the Trans Pacific Partnership takes effect.13 The country's export-oriented RMG sector is already undergoing changes to integrate more companies, especially SMEs, into global supply chains (into which only 21 percent of Vietnam's SME are integrated at this time).14

3. The Guardian. Shrimp sold by global supermarkets is peeled by slave labourers in Thailand. Decemebr 14, 2015.
http://www.theguardian.com/global-development/2015/dec/14/shrimp-sold-by-global-supermarkets-is-peeled-by-slave-labourers-in-thailand